2019 has come to a close, and our company managed to collectively carry-out over 30 days of social work. Not bad! These days have been put towards a diverse number of domains. Let’s do a quick run-down, shall we? 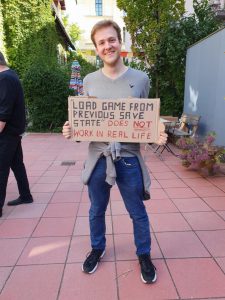 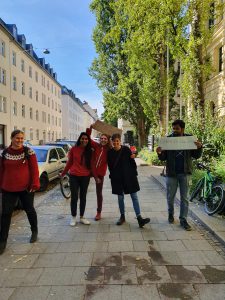 The past year’s focus was mainly on projects regarding climate change, as this topic has been a dominant one in recent years. Most of our employees took a stand against climate change apathy, and supported the “Fridays for Future” protest which took place all over Germany. In Munich, around 17,000 people gathered, chanting slogans to raise awareness about the issue. As many pointed out, „The climate crisis has long been a real threat and concerns all generations!“.

It was Sumit’s first time participating in a protest in Germany. He says: “It was really good to see people of all age groups coming forwards and showing their concern about climate change, and environmental issues in general. It was great to meet a lot of inspiring and committed people, as well as to help create a better future for generations to come.”

Ashwary stated that: “In future, I would like to be part in more protests as they are a good way to bring awareness and make a real change.”

Helping in an animal shelter 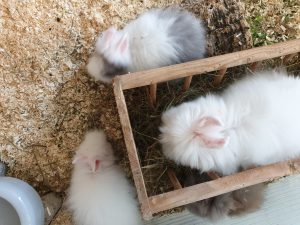 Four employees helped out at an animal shelter in Munich. Susi says: “I used my three Social Days to support the animal shelter „Tierschutzverein München e.V.“. I primarily helped with cleaning the enclosures of rabbits and guinea pigs. It was great fun.”

Socrates, Ashwary and Noe supported “Die Agentur des Tierschutzverein München e.V.“. Each one of them helped to increase awareness for animal protection and rights. They distributed leaflets for a fundraiser event, and had conversations and discussions about these matters. Noe states: „As humans, it is our responsibility to help street animals to get a decent life, because they cannot do it by themselves.“

Saurabh, Simon, Diego and Sumit did some of their Social Days at Diakonia. There they assisted with the distribution of daily utility items to people in need.

Saurabh said: “It felt good to devote some of my time to do some social service. I was saddened to see so many underprivileged people, but it felt great to be able to contribute to this noble cause.”

Simon’s take on volunteering at Diakonia was that: “You are like a tourist who, for a brief visit to one of Munich’s two Altkleider distribution centres, is „gifted“ with the authority (indeed the obligation) to deny a person in hardship a second-pair of „thrown-out“ trousers. Rationally, you know that by doing so you are trying to make things fair for everyone who is entitled to a share of Diakonia’s Altkleider Spende (10 items, one of each kind, per month). On a personal level however, it is very humbling, and urges you to question fairness in society.“

Sumit’s impression was that: “It was really sad to see that still a good number of people struggle to manage these basic items. In my opinion, such organizations are doing a great job by bringing help to the needy by not only distributing items to them, but also by creating employment opportunities for the people who have been out of a profession for some time. It offers around 400 apprenticeships and jobs in Munich.”

Diego says: “Whether we follow fashion religiously, or indifferently grab clothes form our wardrobe, we take for granted the fact that we have them. Diakona reminds us that this is not a given for everyone. The two days spent with them provided joy and sadness at the same time. Joy because, somehow, I was contributing to the well-being of people with less privilege. Sadness being reminded that there are people, like me and you, that have no access to basic needs like food, clothes, and shelter. It goes without saying that this experience left a bitter aftertaste in my mouth. Our everyday life hides from us how privileged we are, and how much we take said privilege for granted. ” 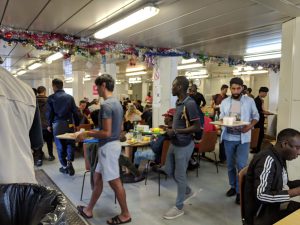 Evan went to Paris to support ‚Restos du Coeur‘ for three days. It’s a food kitchen to feed the homeless, as well as give meal packages to low income families. Evan helped them by setting up, distributing, and cleaning up afterwards. Each day they fed about 700-800 people. He states: “I feel pretty sad working there, because it’s mainly old retirees volunteering there every day, and they are pretty understaffed. It’s a shame there isn’t more funding, and also that there aren’t more young volunteers.” 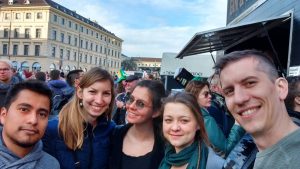 Engagement for communities in Munich

Like two years before, Sasha helped out bartending at the whiskey stand for St. Patrick’s weekend. She says: “It is great to see how much joy the celebration brings to people in Munich and know that you are part of it. Whiskey makes you Frisky! 🙂 All money collected from sales went to supporting Irish communities in Munich and its surroundings.”

Nicole works at a women’s shelter biweekly. She says: “Every second Friday I go to a women’s shelter in Munich to teach German to a 24 year old woman from Nigeria. She’s been living in Germany for two years now and has a 1 year old son with whom she lives in the shelter until she finds her an own flat together with her husband who still lives in a refugee camp. What I love about the job is how much she appreciates the help and how super eager she is to learn German. It’s a small contribution but I think integration can only work with language skills.”

In 2020 we would like to give even more back to the community, and are therefore planning a social day event where we serve together as colleagues.