Introduction to Bayesian inference with PyStan – Part I 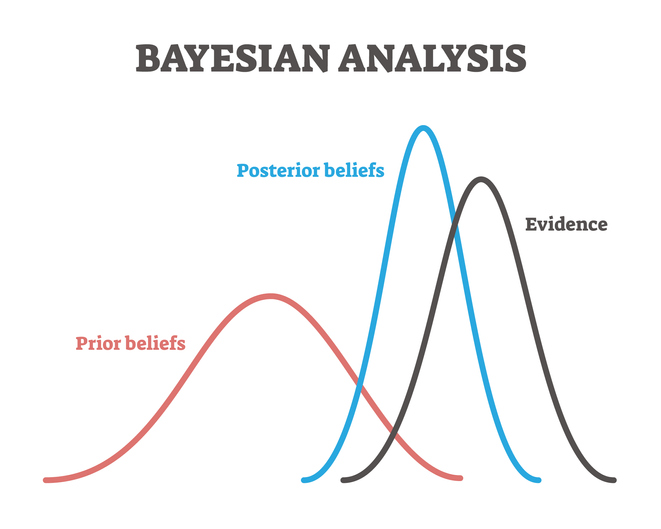 This is the continutation of the first part of the blog post on this topic. If you are completely new to the topic of Bayesian inference, please don’t forget to start with the first part, which introduced Bayes’ Theorem.

This second part focuses on examples of applying Bayes’ Theorem to data-analytical problems.

Obviously, a fair coin would be characterized by

The data we observe consists of a a number of “Heads” and “Tails”. Let’s assume we have NH heads out of N coin tosses. In this case (assuming that all coin tosses are independent of each other and identically distributed (i.i.d.)), the probability of the data given the parameter is given by a binomial likelihood:

In order to have a fully specified Bayesian model, we need to specify a prior distribution over all parameters of the model. In this case, we have only one free parameter: theta. The conventional choice in this case is a beta distribution. The beta distribution is defined for input values from 0 to 1 – thus suitable for a probability parameter. Another reason for choosing the Beta distribution is the fact, that it is a conjugate distribution for the binomial likelihood – which will make calculations easier.

The normalization constant B is the so-called Beta function.

Using Bayes’ Theorem, we obtain the following expression for calculating the posterior distribution:

If we plug in the prior and the likelihood and ignore all normalizing constants, we obtain:

Thus, the posterior is given by:

Plotting the prior, the posterior and the Likelihood

I have chosen a prior distribution with parameters alpha=2 and beta=2. As a reminder: This can be interpreted as corresponding to the prior observation of 1 “heads” and 1 “tails”. It is therefore symmetric around 0.5 and has a probability density of 0 at the values for theta of 0 and 1.0. This of course makes sense – after all 1 “head” has already been observed, so the probability of heads can not be 0 anymore. The same goes for the probability of “heads only” (at theta=1.0). This has to be 0 because 1 “tail” has already been observed.

There are multiple ways of reporting the result of a Bayesian analysis. The three black points in the posterior distribution show (from left to right) the mean, the median and the mode of the posterior distribution. It certainly doesn’t hurt to report one or more of these point estimates. Yet, it should be mentioned that the spirit of Bayesian data analysis is exactly not to rely too strongly on point estimates. Neither of the aforementioned point estimates (median, mean or mode) provide the full picture. The entire information is incorporated in the distribution.

Another way of reporting results of a Bayesian data analysis is by communicating the boundaries of Credible Intervals. These are the Bayesian equivalent of Confidence Intervals. Confidence intervals are often misinterpreted as Bayesian Credible intervals. A 80% credible interval contains with a probability of 80% the true value of a parameter. There are different ways of constructing a credible interval. Depicted in the figure above is a credible interval from the 10th to the 90th percentile of the posterior distribution (area filled in blue). The area under the posterior curve to the left of the area filled in blue is identical to the area to the right of the interval. The area filled in red is the so-called highest density interval (HDI). It also contains 80% of the probability density, but is the narrowest range that does so.

We obtained the posterior distribution in this case analytically – making use of the “cheap” trick of a conjugate prior. So, we have no actual need of using Pystan in this case. But to demonstrate the functionality of Pystan we will do it anyways 😉 .

/model/bin_lik_beta_prior.stan: (code can be found in the GitHub – repository) :

The data section in the above listing tells Stan the names (N_heads, N_tails), types (integers) and potentially constraints (here: positivity) of the data.

If you call Stan via PyStan from Python, then you can pass the data in a dictionary, where the names of the keys have to be identical to the names specified in the *.stan – model file.

The parameters – section tells Stan the names, types and constraints of the parameters. In this case, we call the probability of heads theta and define it to be a real valued (continuous) parameter between 0 and 1.

Meaning the logarithm of the posterior distribution is given by the sum of the logarithms of the likelihood function and the prior. In Stan – Code this is specified in the following way:

Again, both ways result in the specification of the same model. Yet, I would imagine that the second version is probably more intuitive for people who haven’t worked with Stan or similar software before.

What remains to be done is:

The code for doing this is shown in the listing below:

We first open the file and read the file’s contents (the complete model specification) into a string.

Afterwards, pystan.stanModel is called with the model (string) as a parameter. Stan will subsequently compile the model (into C++ – code). This usually can take up to a couple of minutes.

The object that was returned from the pystan.stanModel – function has a method called sampling that can to actually create samples. The data should be passed as a Python dictionary. Additionally, the number of iterations and the number of chains (for simplicity’s sake here 1) can be specified. The usage of multiple chains (=sequences of samples) is usually recommended because significant differences in the statistics of samples from different chains can be indicative of problems with the sampling.

The duration of the sampling can vary strongly with model complexity and number of samples. Here, the generation of 20 000 samples (the first 10 000 of which will be discarded) took around 0.12s. Obviously, the inference of more complex models can take significantly longer. In general, one should take as many samples as possible (constraint usually by computational resources / time). The more samples we obtain, the more precisely any statistic we would like to obtains (mean, stdev,….) can be estimated from the samples. 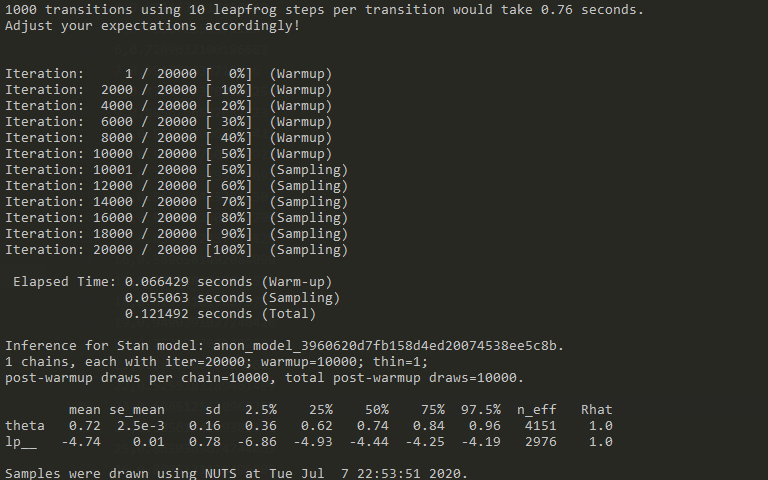 Let’s take another look at Stan’s output above: It tells us that there have been 20 000 samples generated, the first 10k were ignored (warmup = 10000) and every sample afterwards is retained (thin=1). In addition, Stan provides us with summary statistics about the inferred parameter and the value of the log posterior (up to some constant). For example, the mean, the standard error of the mean, the standard deviation and a number of quantiles are provided for the parameter and the log posterior. In addition, the number of effective samples n_eff are specified.

Samples that Stan creates are correlated and thus the number of “effective” / independent samples is usually smaller than the number of samples (here: n_eff = 4151, number of samples =10000). This correlation of samples is typical for MCMC methods in general (it doesn’t create independent samples) – but usually not too problematic if the effective sample size is still “high” (in the thousands). That is another convergence diagnostic. Values significantly above 1.0 are a cause for concern.

So, now that Stan did the sampling for us, we somehow have to make them accessible from within Python:

Afterwards, we can simply work with the numpy array (or Python list if we prefer) as desired.

The following graph illustrates “the magic”: We plotted the 10 000 samples in the left panel. The right panel shows the distribution of the samples – super-imposed as a black line is a beta distribution with parameters alpha=5 and beta = 2 (the posterior distribution we calculated for N_heads = 3, N_tails = 0 and a beta prior with alpha=2 and beta=2).

So, that’s exactly what sampling with Stan is about: We specify a likelihood function and a prior over all parameters and obtain samples which are distributed according to the posterior distribution.

Let’s look at an example with a little bit more “real-world” appeal. Let’s assume that we have data of a number of students: We know how long they studied for a particular exam and whether they passed or not (this example is borrowed from the Wikipedia page for “Logistic Regression” – we will use it to illustrate the Bayesian way of “fitting” a Logistic Regression model).

We will first simulate some data according to a logistic regression model and subsequently use Stan to do the inference for us.

Logistic regression is a member of a class of statistical models called Generalized Linear Models.

A linear predictor function is mapped to the interval between 0 and 1 (we are dealing with probabilities) by being transformed by a logistic function. The outcome variable is assumed to be Bernoulli – distributed (being either 0 or 1, the underlying probability is given by the transformed linear predictor).

Let’s first use Python to simulate some test data. We first sample the preparation times for the exam from a continuous uniform distribution (minimum 1.0 hour, maximum 12.0 hours). The probability for passing is subsequently calculated by:

The code for creating test data is shown below:

The simulated test data (here for 15 students) as well as the underlying (studying-time depended) probability for passing is shown in the figure below: 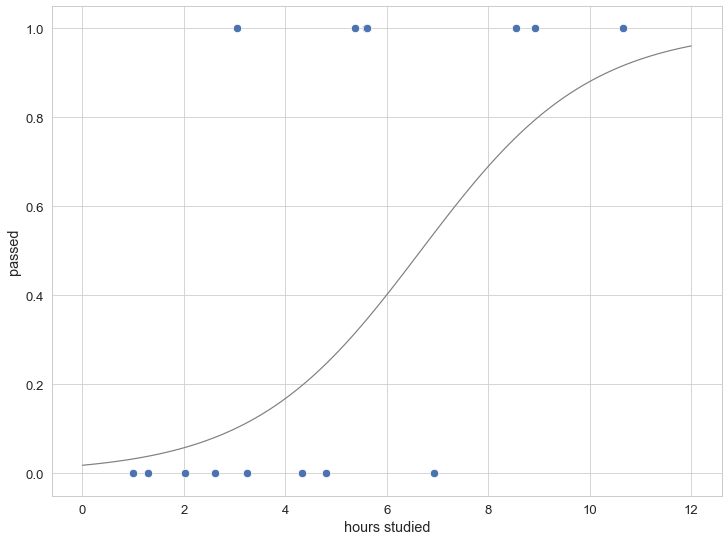 The Stan model for doing inference on this model is given below. We pass the total number of data points N (the number of students) and for each student the number of hours they studied as well as whether they passed. In this case, we have two parameters (for the linear predictor, the intercept beta and the slope alpha).

The specification of the likelihood might again need some getting used to. Basically all the transformations (logistic function as well as Bernoulli distribution) are packed into one line 😉 :

The code for compiling the model and sampling from it is very similar to the code from the first example.

We again call the StanModel function and the sampling method:

As already mentioned, we obtain samples for two different parameters this time (slope and intercept for each linear predictor). The samples of these parameters are displayed in the left panel below. We can see a couple of thousand samples for the parameters alpha (x-axis) and beta (y-axis). Each pair of parameters describes a logistic curve. To illustrate this further, 4 points have been picked (basically at random). The corresponding 4 logistic curves (calculated by plugging in the value for alpha and beta for that sample) are shown in the panel in the middle.

Congratulations, you have made it to the end (you didn’t skip any part, did you?). I hope this blog post served as an introduction to Bayesian statistics / Bayesian inference (with PyStan) and hopefully I could convince you to take Bayesian analysis into consideration as an alternative to MLE – methods (if you haven’t already).

This post could obviously only scratch the surface on a lot of topics – e.g. the richness of models that you can infer with Stan (from Generalized Linear Models to Time-Series models (Facebook’s Prophet [2,3] uses Stan) to systems of Ordinary Differential Equations (interesting among others for pharmaceutical companies for doing inference on so-called pharmacokinetic models [4]))…

Also topics like dealing with missing data in Bayesian data analysis, dealing with hierarchical data or making decisions based on Bayesian inferences (Bayesian decision theory) would be interesting to eventually discuss further – maybe there will be a follow up blog post in the future.

I hope you anyways got a taste of what Bayesian methods in general and Stan in particular have to offer.
Thank you again for reading and have a great day!